We are delighted to share a selection of our successful collaborations with corporate entities on behalf of the Alpine environment:

Since 1991, Kraft Jacobs Suchard and Alp Action have been running the largest international, privately-funded tree-planting campaign in the high Alps.

More than half a million trees have been planted in the the six Alpine countries and pristine forests have been bought in France, Switzerland and Slovenia. The aim of the “Green Roof for Europe” campaign was to preserve and strengthen protective forests contributing to the safety of mountain communities and safeguard the natural habitats of threatened species of flora and fauna.

“Discover the Alpine Environment”, a 60-page teaching kit, presented with a film and conferences, developed with Milka is being distributed to all secondary schools in France, Switzerland, Germany, Austria and Italy, under official Government recommendation.

In 1996- 1997, Novartis, Alp Action and the Valais League for the Protection of Nature have revitalised one of Switzerland’s last lowland turf, providing a vital refuge to numerous species including migratory birds.

In the Lauterbrunnen Nature Reserve, the creation of the “Timberland Trail”, stretching 7 kilometers, involved the restoration of an ancient pasture route which now allows hikers to discover large Alpine fauna. The preservation of ancient crafts and the restoration of high-pasture chalets is the basis of Partnership with Zschokke Hol dings, Switzerland’s leading construction firm.

The rehabilitation of traditional mountain agriculture is a priority for two Alp Action Partners : Tetra Laval International and Swiss-based Unigestion Holding. The latter has also contributed to the publication of “Mountain World in Danger”, acknowledged by media and scientists as a reference on climate change. A sequel, “Protecting the Atmosphere”, was released in January 1994.

The Swiss Bank Corporation and Credit Suisse have respectively contributed to a nation-wide awareness campaign in favour of endangered Alpine species and the protection of threatened bat colonies in the Canton of Fribourg.

“Les Alpes Apprivoisées”, a study on the impact of infrastructure on the Swiss Alps, supported by the Société Générale pour l’Industrie is a reference for policy-makers and the general public.

The restoration of the community oven of Blatten, one of Switzerland’s oldest (1820), with the Swiss Association of Master Bakers and Pastry-Makers, is at the core of a campaign to rehabilitate the cultivation of traditional mountain cereals in the Lötschental Region.

In 1998-99, the Bread of the Alps is supporting the creation of a cultural trail through the Swiss Alps: “In 30 days from Montreux to Müstair”

The release of the first French-born Gypætus Barbatus took place in the French Haute Savoie on June 1991 with the support of Safra Republic Holdings.

From 1991 to 1998, eleven young Gypaetus, named “Republic I toXI”, were released as part of an international campaign to reintroduce the largest of Alpine birds (wingspan: 9 feet). In August 1997 the first wild-born Gypaetus flew free in the Alps.

In a reserve on the shores of the Lake of Annecy, Alp Action has restored and converted the 12th Century “Tour de Beauvivier” into a nature-observation tower. With the Fondation de France, Alp Action has completed the stabilisation of shores and provided amenities for soft tourism around the Lake of Lamoura, in the French Jura mountains.

The Alp Action Fund and Milka-Kraft Jacobs Suchard jointly purchased the gorges and forest of Bruyant in the Vercors Regional Park.

Above Chamonix, the restoration of the Chapel of Tours and its baroque retable is the fruit of the Partnership with Milka- France that has also launched a nationwide school competition twinning alpine and non-alpine schools, backed by the French Mayors’ Association and Nathan.

In 1996, a Milka educational campaign mobilised an estimated 48,000 primary school classes in favour of the otter.

In 1997, an exhibition on the Alpine environment toured 8 large French cities. The water pack “La Rivière m’a dit” was organised in 1997-98 jointly with FRAPNA, with the support of Elf Aquitaine, Unigestion Holding and Agence de l’eau, to raise youth awareness on water conservation.

In 1999, with the Parc National du Mercantour, Alp Action created a CDRom for schools to raise awareness on the wolf. In 1999, Clarins helped preserve the fauna and flora in a precious wetland on the Annecy Lake. Read more here…

In 1992, the Alp Action Fund helped to launch “Hindelang Nature & Culture” in Bavaria, a pioneering programme integrating agriculture, nature and landscape protection with soft-tourism, with a Quality Label for dairy and meat products.

Following its purchase in 1992 of rich prairy land on behalf of the Swiss League for the Protection of Nature to create the first “Butterfly Sanctuaries” in the Alps, Clarins acquired the richest butterfly prairie in Western Bavaria at Halblech/Bannwald.

Riso Deutschland supported the publication of “Discover Nature – Protect Nature”, a teacher-training manual, distributed by the German Ski Federation under the auspices of the Federal Ministry for Education to 35,000 secondary school teachers.

The Swiss watchmakers, Ebel, Alp Action and the regional Government of Aosta jointly restored sections of the 2000 year old “Transalpine Roman Consular Way to Gaul” to promote quality, cultural and nature-tourism in the area.

With Ermengildo Zegna, Alp Action has restored the “Dolcianian Way”, a 2-day historical and nature discovery trail running under the towering Monte Rosa.

In partnership with Aeroleasing, Alp Action has contributed to the restoration of the Church of San Donato, referred to by Carlo Levi as the “Sistine Chapel of Italian Ceramics”. 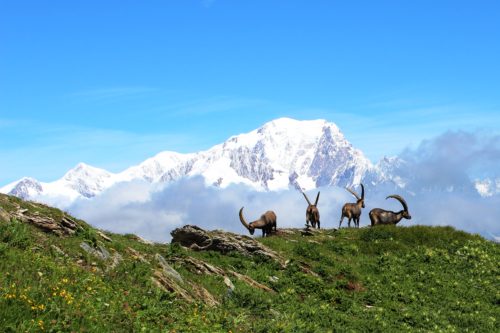